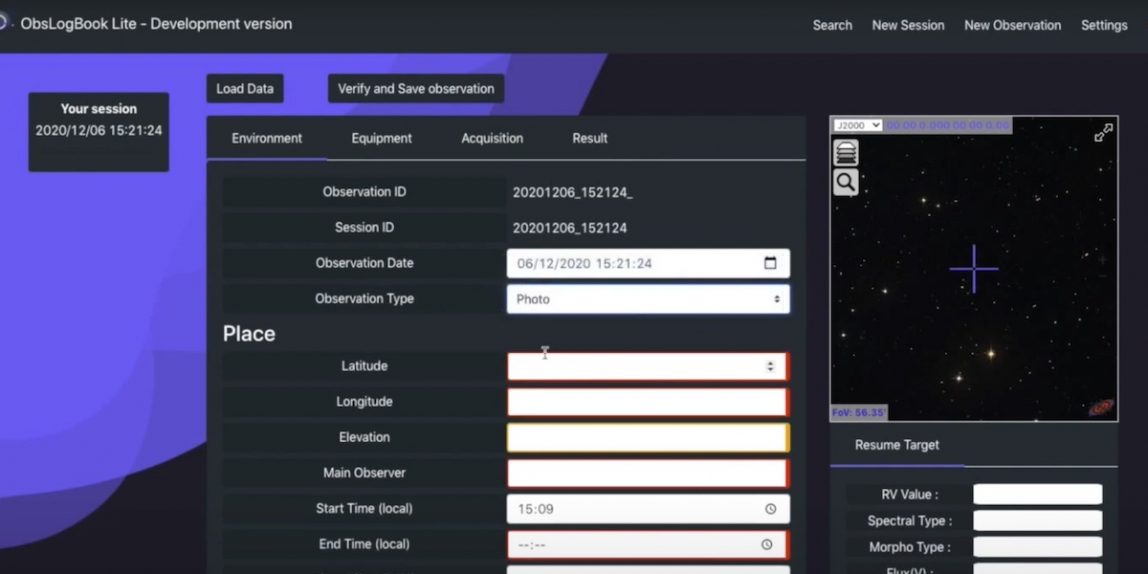 Within the astronomy observatories there are so-called “Observatory Log Books”. These notebooks are used to record all the important informations concerning the observation sessions carried out by the astronomer with the telescope.

One can thus find the names of the astronomers with the time of arrival, departure, the weather, but also the problems encountered so that the teams of technicians intervene during the day to keep the telescope operational for the following nights. In some cases we will also find the activities carried out, namely the objects observed or photographed.

In parallel to this dome book, the astronomers then make reports or scientific accounts of missions concerning the observations made.

In addition to these aspects of recording data from the use of telescopes, there is precisely one difficulty that arises when doing amateur astronomy, namely the volume of data. This is particularly true for astrophotography and spectroscopy.

The number of raw images of the target, darks, flats, offset, calibration image accumulate quickly depending on the number of observations made, associated with several data formats.

It is also important to note that this data is used or stored on different operating systems (Windows, Linux, MacOS), or devices (SD Cards, Hard Drives, etc..).

All this disparity of data and media is potentially a source of errors, waste of time and is not necessarily easy when you are not well organized !

Based on this observation, ObsLogBook was implemented to facilitate the collection and storage of data. ObsLogBook is thus comparable to a digital dome book.

The idea of this software is to automatically retrieve as much data as possible and store it in a flexible database for future evolutions and use cases.

In order to retrieve the data during the observation, ObsLogBook retrieves the information from the INDI server. Here is a brief description of the KStars/EKOS/INDI suite, which you can also find in the following article : Phecda Spectrum

The free software suite Kstars / EKOS /INDI is based on the common client / server concept. This suite is particularly useful and efficient. Here is a quick detail of the software that compose it.

“KStars is a free planetarium software, using the KDE environment. It allows to represent the night sky seen from any place on Earth, and at any date. Its basic catalog contains all known objects of magnitude less than 8, and the extended catalog contains objects up to magnitude 16, i.e. up to 100 million stars, 13,000 deep sky objects (nebulae, clusters, galaxies), the planets of the solar system as well as a large number of other objects.” 2 Wikipedia.

“Ekos is a cross-platform observatory control and automation tool, Windows, OSX, Linux. It is specifically designed for astrophotography. It is based on a modular structure to perform common astrophotography tasks. This includes very accurate GOTO pointing with an astrometric reduction solver, the ability to measure and correct polar alignment errors, auto-focus, auto-guidance, single or batch image capture with filter wheel support. Ekos is integrated with Kstars.” 3

“The INDI library is a collection of programs designed to control astronomer’s equipment including: Telescopes Cameras: CCD, CMOS and DSLR Domes Focusers Filter wheels Spectrographs, Etc. It is based on the INDI protocol which is designed to support control, automation, data acquisition and exchange between front-end hardware and software devices. INDI stands for Instrument-Neutral-Distributed-Interface and was developed by Elwood C. Downey of the ClearSky Institute.” 4

It is thus possible to control one’s telescope remotely via the network, all in a very simple and light way, because the INDI server can be embedded in a Raspberry Pi 5 on the ground.

During an astronomy session, it is thus possible to launch the data retrieval via a button provided for this purpose. If an INDI server is active, as well as the API, the data are filled in the “Observation” window. If necessary, it is also possible to enter by hand all the information concerning the hardware configuration and the target being acquired.

During the registration process as well as during the verification before registration in the database. In the same way as some very good quality software 6, the presence or absence of “important” data is indicated with a classic color code :

Here is a short presentation of the application in operation, in which we find:

The entire source code is licensed under LPGL v38, the application is developed in Javascript (ReactJS) and the API and in Python with a Database in MongoDB11 :