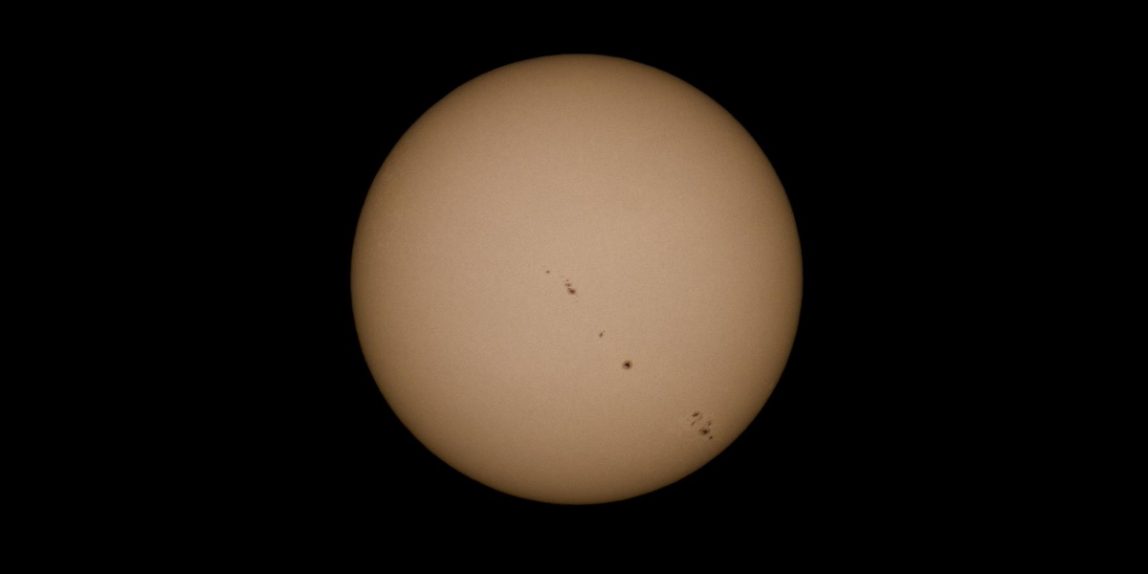 The sun sets the pace for our days and moods, yet we tend to forget that a star filled with secrets where chaos reigns is just around the corner!

Our luminous neighbor is therefore a godsend for any astronomer, because if there is a delicate parameter to manage in astronomy it is the weather. Having a clear and good quality sky at night is far from being a given. Thus, one of the advantages of having a star near your home is to be able to capture its light during the day at any time. Indeed, the latter crosses the clouds if the weather is bad. After having tried an introduction with the analyse spectrale de Véga at very low resolution, let’s push the cursors a little with the Sun !

The problem of the capricious weather being solved, there remains another step and not the least, to analyze more finely the light which reaches us. But then, how to analyze this light ?

Rather than trying to explain to you what spectroscopy is with my own words and try to give you an umpteenth explanation that might be incomplete, I might as well put forward the work of people who have already done it, and done it very well ! 1, 2

Also, to quickly understand what spectroscopy is, I can only advise you this recent video particularly well done from the series “Chercheuses d’étoiles” par Le Monde.

In order to obtain the “bar code” of our neighboring star, I used a spectroscope that decomposes the light that passes through our atmosphere. The model of the spectroscope is an Alpy 600 from the company Shelyak5 mounted on a monochrome Atik camera to be able to record the spectrum obtained.

Here is the raw image recorded by the camera, in other words the 2D spectrum of the Sun. The spectrum spreads from the left in the blue to the right in the red.

The capture is done with a monochrome CCD camera. However, from this raw image we can generate the same spectrum in color.

Once the image is processed with the Demetra, I obtain the spectral profile of the Sun below, namely its 1D spectrum.

Several absorption lines are clearly identified. Among these, some are characteristic of the spectral type of our neighboring star, namely a G2V type star. We will come back to what is called the spectral type of a star in a future article. In the meantime, here is a quick complement to the previous video.

In astronomy, stars have four main characteristics: color temperature, surface gravity, mass and luminosity. These characteristics are not independent of each other and are not directly measurable. However, they allow to associate a spectral type to each star […]

The stars of type G (or yellow dwarf) are the best known, because the Sun belongs to this type. They have hydrogen lines even weaker than those of type F and lines of ionized or neutral metals. The lines of Ca II H and K are very pronounced. The G type (…) is one of the last ones where we can distinguish still quite strong molecular lines (CH, CN, C2, OH).
They owe their name “G” to the CH molecule which presents a strong absorption around 430 nm identified by Fraunhofer by the letter G. 6

The image below shows the spectrum of the Sun that I acquired, indicating the characteristic lines of G-type stars.

Let us now detail the elements that make up our close neighbor.

We note here interesting elements that constitute the atmosphere of the Sun, namely several of the Fraunhofer lines12 as :

“An electron tends to occupy te level closest to the nucleus. When the electron goes from a level n to a level m closer to the nucleus, the energy difference ΔE between the two levels is emitted as a light wave, of length equal to : λ = hc/Δ” 3

This said, we are talking about an emission of a light wave due to the release of energy, we would have a line in emission on the spectrum. But in our case, on the Sun, it is the opposite that happens. Indeed, the stars are considered as spheres of gas very hot and compressed. This source of light is however surrounded by a gaseous atmosphere colder and less dense. The atoms of the surrounding gas will be excited by this continuous radiation and change level by capturing the necessary energy and we see absorption lines appear on the spectrum.3

Thanks to this profile, it is also possible to determine the temperature of the object studied here which behaves like a black body.

“In physics, a black body is an ideal object that perfectly absorbs all the electromagnetic energy (all the light whatever its wavelength) that it receives

You can also visualize dynamically the behavior of black bodies as a function of temperature with the Université of Colorado application below.

It is therefore from Planck’s law and Wien’s law that we can try to determine the temperature of the Sun from the previous spectrum. For this I used the software Visual Spec by Valérie Desnoux10, because the latter contains an automatic Planck profile calculation function that gives us the temperature.

Also, even if the software gives us the temperature, this Planck profile allows us to easily calculate it. Indeed, we now have the maximum wavelength (5084.46 Å). It only remains to apply Wien’s law to find the temperature :

“The wavelength λmax which, in the spectrum of a black body, corresponds to the maximum energy, varies inversely with the temperature T (in degrees Kelvin)” 3

A rather interesting result compared to what we find in the literature, because the temperature of the surface of the Sun is indicated at about 5750 K3,7,8. The value found here corresponds well to the Planck profile of our star, whose maximum emission is in the visible.

To conclude, with this quick and modest analysis, we have been able to rediscover some physical and chemical aspects of our daily companion by walking in the footsteps of the pioneers of the past. Probing the mysteries of our star in its present state is exciting, and I look forward to exploring other stars to share it with you in the near future…